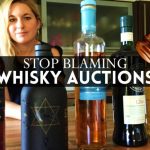 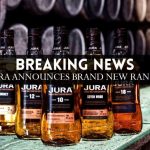 Here we are! I’m finally starting this new series on the blog, meant to replace the usual whisky reviews I used to write from time to time. If you want to understand why I decided to switch to this format, you’ve got all the explanations here 😉

Here’s what I received, purchased & tasted this month:

“The smokiest whisky from the anCnoc Peaty range – Peatheart! The Knockdhu distillery has used barley malted to 40 PPM (for perspective, Highland Park whiskies sit at around 20 PPM, while Ardbeg whiskies weigh in at about 50-55 PPM) and it was aged in ex-bourbon barrels before bottling at 46% ABV.”

“The first release in a series from Highland Park launched in 2017, The Dark is a 17 year old single malt which has been drawn from European oak Sherry-seasoned casks. A fantastic example of how blending Sherried richness with elegant smoky elements can work spectacularly.”

“Since 1992 Benromach distillery bottles its old vintage very slowly. This rare expression from 1977 was matured for 39 years in American Hogshead, cask number 1268. It comes from the old Forres distillery existing before it was taken over by Gordon & MacPhail. Quantities limited to 225 bottles for the world.” 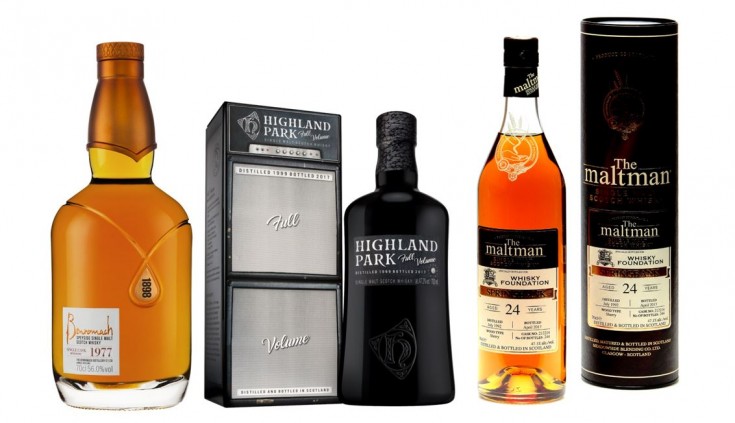 “A 15 year old single malt from the Speyburn distillery, introduced to their range in the latter half of 2017. Maturing in a combination of American and Spanish oak casks for 15 years, this Speysider is particularly creamy and vibrant.”

“FULL VOLUME was created using 100% ex-bourbon casks rather than our traditional sherry-seasoned ones. During 1999, a combination of 481 casks – 200 litre barrels and 250 litre hogsheads – were filled at strengths of between 63.6% and 63.7%. The whisky was filtered at just over 4oC and delivers flavours of creamy vanilla and sweet citrus fruits from the bourbon casks, balanced by Highland Park’s characteristic aromatic smokiness.”

“Launched in the latter-half of 2017, this intriguing expression from the Kilchoman distillery on Islay was fully matured in casks that previously held red wine from the famous Douro Valley in Portugal. It was distilled in 2012 and bottled in 2017 at 50% (which is a slightly higher strength than most Kilchoman bottlings!).”

“A small batch release from the Wolfburn distillery, showing off their single malt Scotch whisky after a maturation in 100 litre first-fill ex-bourbon casks. The name comes from where these little rascals were matured: warehouse 1, stow 28. Batch No.128 is a release of 6,000 bottles.”

“The ninth release in Glenmorangie’s Private Edition series is the Spìos (which means ‘spice’ in Scots Gaelic). This flavoursome single malt is notable for being fully matured in casks that previously held rye whiskey! Not just any rye whiskey, mind you. Glenmorangie’s Dr. Bill Lumsden picked casks used to age whiskey made from a 95% rye mash bill for six years as the maturation vessels for the Spìos.”

“Toiteach is Gaelic for “Smoky”, a hint of what’s to come. That’s right, a heavily peated Bunnahabhain! A great chance to try a smoky malt from a distiller of gentle, fruity Islay whisky”

“James MacTaggart has been Master Distiller at Arran for 10 years – what better excuse to release a limited edition whisky?! This expression was created using whisky matured in first-fill bourbon barrels – which were laid down during MacTaggart’s first few months as Arran Master Distiller in 2007. 12,000 bottles were produced.” 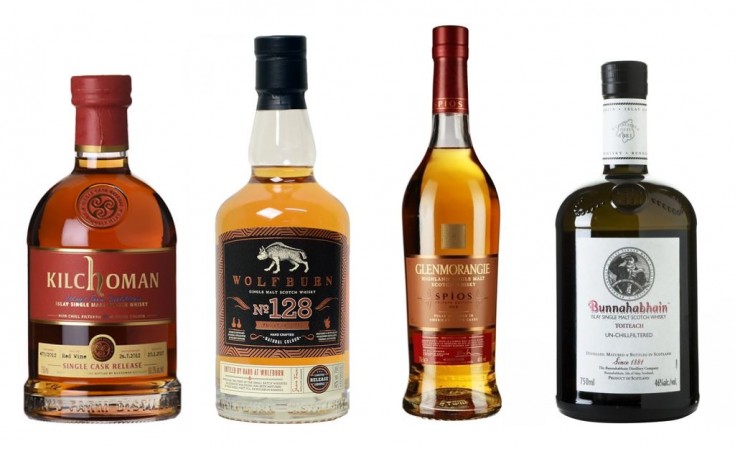