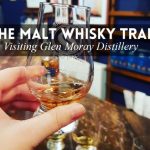 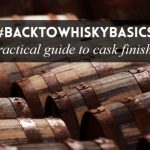 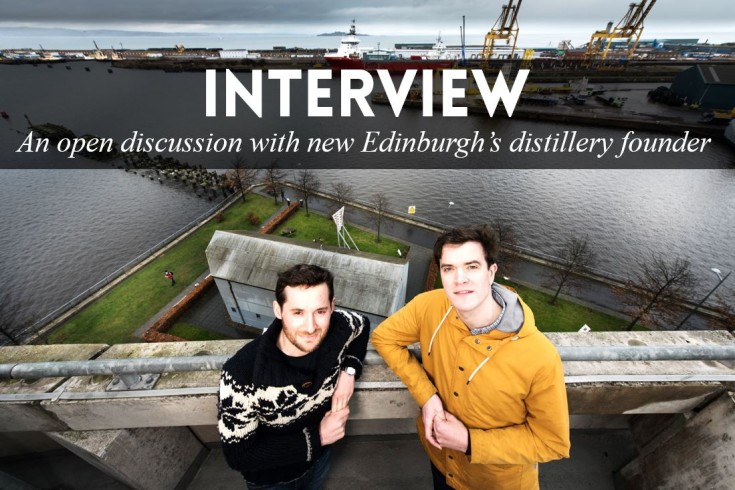 Get excited: Whisky distilling is soon to return to Scotland’s capital city.

Such a headline sounds intriguing right? At least that’s what I thought when I came across the news of a whisky distillery being built in Leith. You’ve probably all heard about this project by now but still, a few months ago, I got in touch with one of the two founders behind the soon-to-be Port of Leith Distillery, Iain Stirling, who kindly agreed to tell me more about their malted adventure. 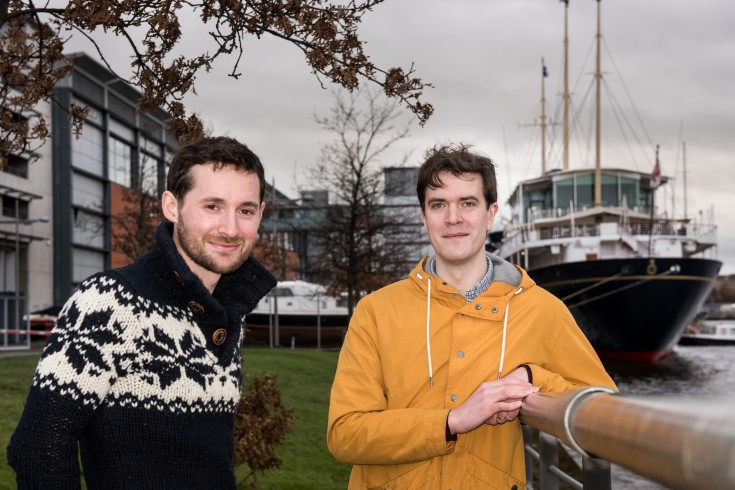 First of all, could you please tell me a bit more about yourself: where do you come from, career background etc. and how did you come up with the idea of building a distillery in the Port of Leith (Edinburgh)?

We both grew up together in Edinburgh, went our separate ways for university before ending up sharing a flat together in London in our early 20s. I ended up in the wine trade and Paddy (Patrick Fletcher is the co-founder of the distillery with Iain) became an accountant. We began taking turns to buy a bottle of whisky for the house – generally whatever was on special offer in Sainsbury’s. Eventually we upgraded to tastings at Milroy’s of Soho where we entered a whole other level of quality and intrigue. It was probably around this time that we began dreaming, like everybody does, of making the stuff ourselves.

The fact that Edinburgh didn’t have its own single malt distillery seemed like an obvious opportunity, but it was when we were ‘experimenting with elements of whisky production’ (er… can’t go into too much detail there) that we began to develop some exciting ideas about what we would do if we were to make our own whisky. By this stage, we were just about turning 30 and had accrued just about the right level of professional experience in our respective fields to make a proper go of it. So we did.

It always had to be Leith – that’s where the heritage is, that’s where we could build something new and that’s where so many exciting things are happening right now. Leith is Edinburgh’s Brooklyn or Shoreditch. It’s the bit of Edinburgh where creative people can still find a space, feed off each other, and produce great things.

What’s your personal relationship with whisky: first sipped, any noticeable milestone in your malted journey? A favourite production country/flavor profile/distillery/expression?

We became properly interested in whisky right at a time when the world of whisky was expanding exponentially beyond Scotland’s border. The English Whisky Co had just released Chapter 1, we visited the recently opened London Distillery Co, we were marveling at Mackmyra’s new vertical distillery, Japanese whisky was getting lauded above Scotch in some quarters and a new distillery seemed to be opening every day in the US. That was really exciting, because watching others do it made us think we could do it ourselves.

It was also mildly worrying, because so little that was new and exciting was coming out of Scotland, with a handful of exceptions. As Scots, we feel incredibly proud that Scotch Whisky is the world’s Global Premium Beverage and we want to do our little bit to make sure that Scotland doesn’t lose that crown. It’s a tightrope for the industry, producing only the highest quality, but also allowing the innovation that non-Scottish producers take for granted. You don’t want to kill the golden goose… 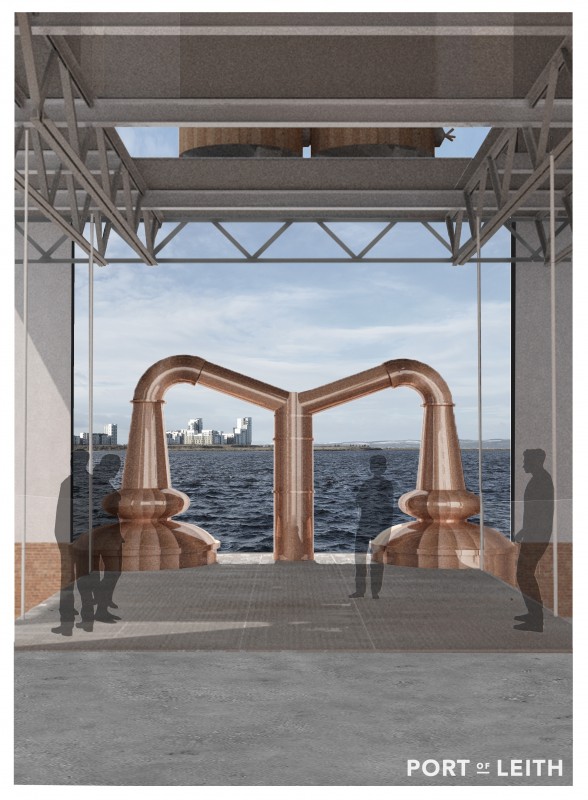 You’ll be bringing whisky distilling back to Edinburgh: how much of a challenge has it been so far? Did you face any obstacles? Four years passed between the idea and the confirmation of the distillery site in March 2017, why all this time?

We never thought it would be easy, but it’s perhaps been a little harder than what we anticipated. Because of our desire to be in Edinburgh, we needed three things: a plan, a site and investors. And all three are co-dependent, so a very careful balancing act is required.

The plan was perhaps the easy part for us. We’ve been lucky to receive a lot of help from people with long careers in the industry – in fact we’ve found the industry to be full of friendly, helpful characters. Paddy’s background in finance and my own background in international beverage sales and branding did the rest.

By far the most challenging thing was finding the right site. Edinburgh doesn’t have an awful lot of space in it, and finding a space that will suit a new-build distillery is particularly challenging. Especially considering our plan involved tourism, ruling out the more industrial parts of the city. Getting an agent or landlord to take you seriously when you don’t yet have funding behind you is difficult.

What is the next challenge?

The next challenge is obtaining planning permission for our building (update: application has been submitted last month!) and if everything goes well for us, we would open by Christmas 2018 and start filling casks around 6 months later. And financing, which is an ongoing battle. As an investment, a distillery is a really safe, cash generative business. But those early years are hard and require faith from your backers.

I Dare You: Could you describe the soon-to-be distillery in one sentence?

Our building will be brand-spanking-new statement of intent, with the production of incredible single malt at the core of its design so we can distill a beautiful whisky that Edinburgh will be proud to call its own.

The distillery is said to bring a new approach to Scotch whisky, especially when it comes to fermentation, can you tell us more about this?

To make whisky, first you ferment a beer, which you distill into whisky. The fermentation part of that process has so many more variables, decisions and opportunities than the distillation part. We’ll leave it there for now…

So more technically-speaking, what will be the production capacity of the distillery, with what kind of equipments – and apart from whisky, are you planning to produce any other spirit?

We aim to produce up to 400,000 lpa (litres of pure alcohol), and that starts with a 1.5 ton mash tun, feeding five stainless steel washbacks, one wash still and one spirit still. We plan to produce gin as well, so we’re putting in a column still and gin still. The tenders are out right now with a range of manufacturers so we can’t get too much more specific on the kit itself for the time being. We’re operating on a tight site, so we’re laying out a vertical production system which will be unique in Scotland.

We’re laying out a vertical production system which will be unique in Scotland ! 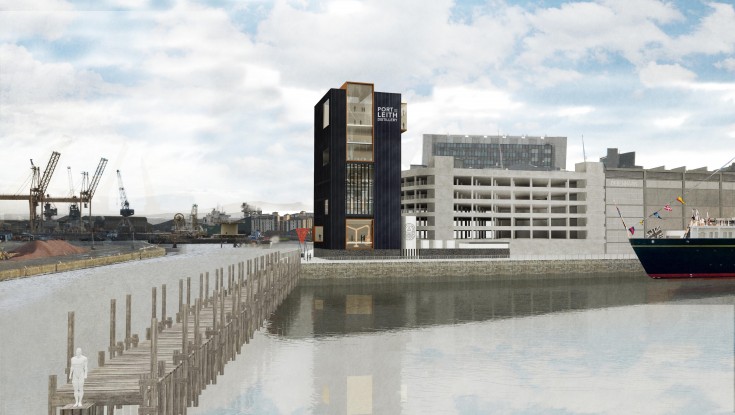 You’ll be producing Lowland single malt, do you think the geographical classification of Scotch is still relevant those days?

My wine background gives me an intrinsic respect for appellation systems, but then in wine, geography and terroir play such an important role in dictating style that it’s hard to ignore them. Furthermore, there are so many thousands of producers in France, for example, that an appellation system is genuinely useful to give a consumer some idea of what’s in the bottle.

The world of Scotch whisky is tiny in comparison. It doesn’t take a long time before you learn where the big brand distilleries are located, and what style of whisky they produce. So a classification system is not so useful from that perspective. It is of course ignored by a fair few people too.

Nevertheless, as whisky fans, we like it and there’s value in each region developing and championing their own respective style. Blind tasting a whisky and trying to figure out where it’s from was part of the fun for us. If anything, we want the industry to make more noise about the regions and their flavour profiles. Our whisky will be a lowland malt.

Do you plan to open a visitor centre? How do you think the distillery will stand out within Edinburgh’ touristic offer?

Our first and utmost aim has always been to make our own beautiful and distinctive whisky, but we always felt a dissatisfaction with a lot of the experiences we’ve had when visiting distilleries, and saw an opportunity to do something better. So while there will be a reception, a shop and a bar, we’re not building a visitor centre. We’re building a live, throbbing and exciting distillery that can accommodate visitors and let them get as close to what we’re making as possible.

There is undoutably a huge potential demand from visitors to Edinburgh for a Single Malt Whisky Distillery to visit, and our location, right next to the Royal Yacht Britannia, one of Scotland’s top attractions, should make us a very convenient prospect.

New distilleries are spreading all over the country: do you see this as a threat or an opportunity?

It’s amazing to us that there are still fewer than 120 distilleries producing malt whisky in Scotland. Given the enormous global market, and Scotch Whisky’s incredible reputation, that is a tiny number of producers. People have this sensation that a huge number of new distilleries are opening, but actually when you consider the additional capacity they will bring to Scotland’s overall production, it’s a drop in the loch.

This is an industry dominated by a handful of big players. On the one hand, we are very grateful to those big players for establishing the reputation Scotch Whisky has today and we love their products. On the other hand, as whisky fans, we want to see much more diversity on offer.

The market is shifting. Blends will dominate for many years to come, but the appetite for Single Malt Whisky, expressing a distinct place, ambition, people and story, is growing steadily. It’s a trend we’ve seen across the food and beverage sector, and it will continue to grow with Scotch whisky. 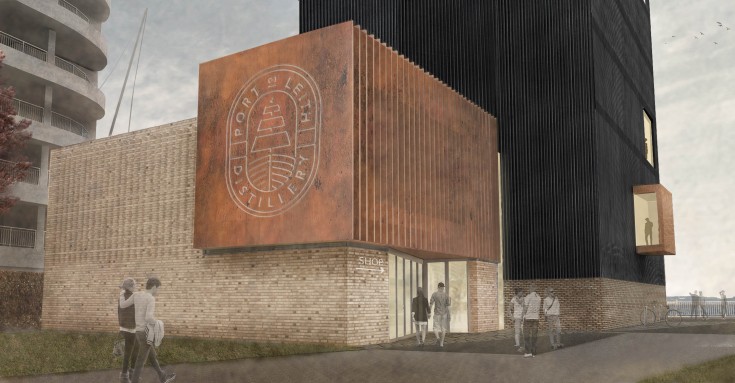 Do you consider the future distillery as a craft distillery, and if so, why? “Craft” has still no official definition and is being overused in every possible way… How would you personally define “craft”?

It’s not a word that we’ve ever applied to our plans. The term suggests a certain scale of production, and I guess we’re probably a bit too big, even if we’re tiny compared to most distilleries in Scotland. It’s very hard to create a viable whisky business without thinking in terms of hundreds of thousands of litres.

It’s probably impossible to agree on a rational definition that will suit anyone. Let a producer decide whether they want to use it or not, and then consumers can decide whether they want to believe it. They’re getting pretty savvy at seeing through the bullshit. There’s something quite tragic in witnessing a big distillery or brewery trying to dress up a new release as a ‘craft’ product.

How do you see the future for the Port of Leith Distillery: how do you picture the distillery in 10 years time? Any crazy dream you’d like to achieve?

If we told you the full scope of our plans, you probably would think we’re crazy, but Port of Leith Distillery is Stage 1 in our plans. It won’t be too long before you start hearing about stages 2, 3, 4 and 5.