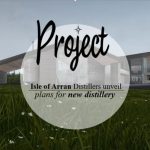 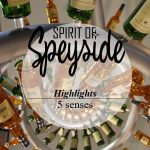 After some last-minute changes in our travel plans (Let’s put it like that and not mention we actually did miss our flight because my finally-not-so-perfect-everyday boyfriend forgot his passport – needless to say there’s only one flight a week to Glasgow from our tiny French airport and we had to fly to London, rent a car there and drive all the way to Scotland – stopping for the night in a small old-fashioned country-style hotel on the M6 around Manchester – lovely!), we finally made our way to Islay (after a couple of days on the wonderful Isle of Arran), a.k.a The Whisky Mecca.

And the first thing that struck us there weren’t all the brown distillery signs popping up everywhere on our way, but this weird (please keep in mind we’re French and friendliness isn’t really in our culture when driving… well, also when doing so many other things actually, rude little frogs) habit from the other drivers passing by us in the opposite direction to wave at us like we had known each other for ages. First time, we thought “oh well, he may have a friend with the same red van”, but after this same strange experience happened to us 4,5, 10 times, we just assumed people were genuinely friendly and polite in this remote part of the world.

And this incredible sense of community can actually be found in every industry on the island, especially in its most renowned industry: whisky (I’ll talk more about this “community” feeling in an upcoming piece dedicated to Bruichladdich – where we had the immense chance to stay for 3 nights – litteraly sleeping a few yards away from the stills and maturing barrels).

On our first day on the island, we couldn’t be more excited to head North and make a first stop at the ancient Port Ellen Distillery, now still being used as a malting facility runned by Diageo and providing malted barley to some of Islay distilleries. 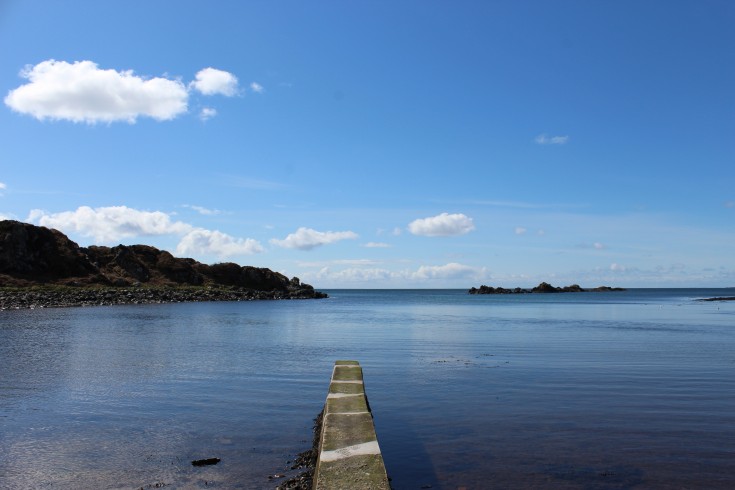 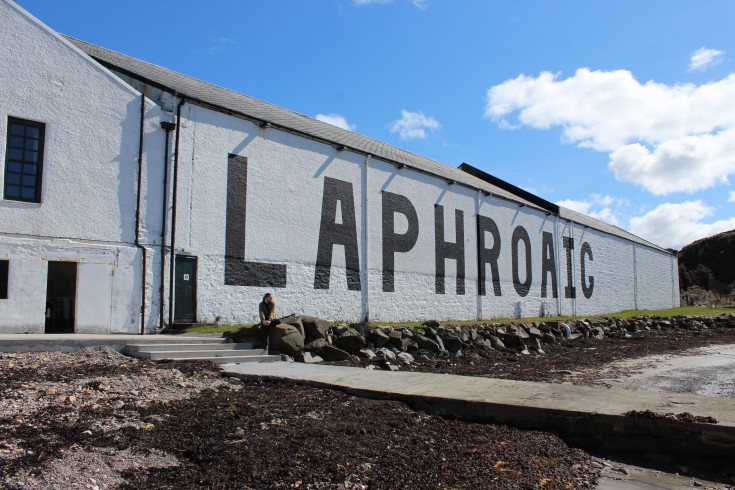 On the menu this day was a long-expected visit to The famous Laphroaig distillery, where we had the chance to be guided by David, working for the distillery since as far as 1974 – when times on Islay were much, MUCH more different and difficult.

Before the tour, we waited for a few minutes in the visitor centre lounge, overlooking the scenic Islay coastline. I don’t really see any better way to wait for your distillery tour to begin (Also definitely a bit of a teasing as you get to witness the previous visitors savouring their dram in a comfy couch….). A slight peat smell’s in the atmosphere with all those glasses swirling around… Here I began to get very impatient! 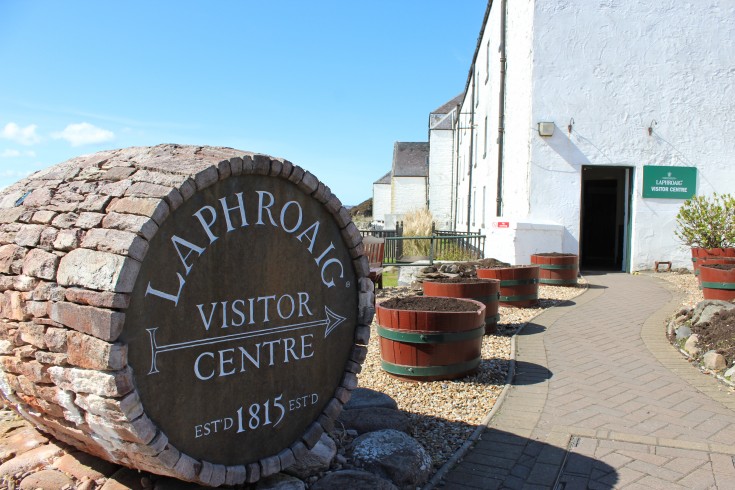 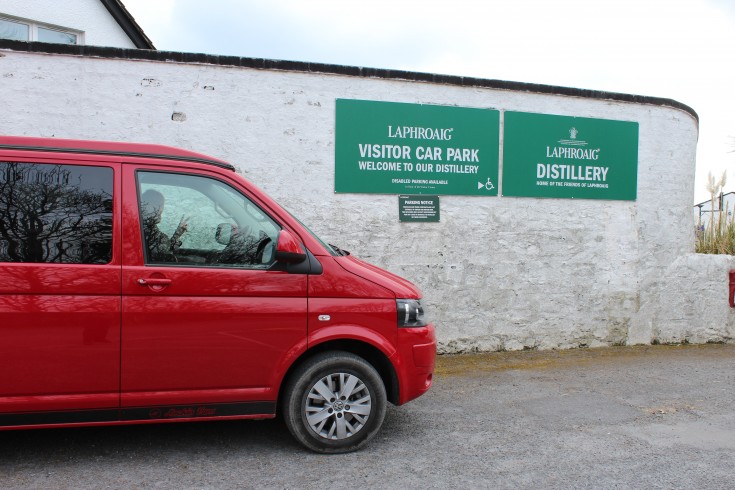 David finally appeared and lead us to a wee room where he gives us a small introduction about Laphroaig history, when the distillery was only using 3% of its whisky for single malts – a figure which has now soared to approx. 70% – keeping the rest of the production for blending.

We’ll then be guided to the malting floors as Laphroaig still does its malting on-site (which is rare enough to be mentionned – less than 10 distilleries in Scotland are still doing this) – obivously, the smell is simply incredible as we go up to the second storey (each storey containing 7 tons of malting barley – a 6-days/6-nights process) – being shown the difference between ancient malting techniques and modern-days processes. 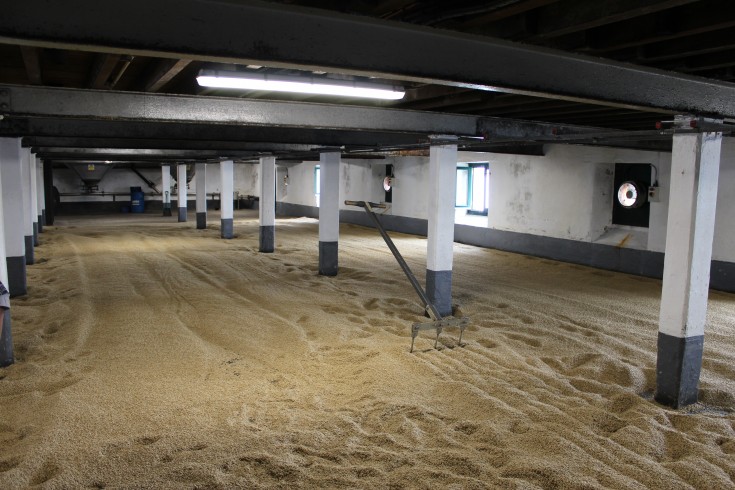 Our next step brings us to the smoking room where Laphroaig barley is first smoked for 15 hours and then dried for 19/20 hours.

While making our way to the dark peat oven, David offers us a long few minutes emphasis on how hard where the ancient times working as a distillery operator and peat cutter – when everything was basically done by hand – and to be honest, holding those peat cutting tools is already too much of an effort for me (needless to say I am not really in the “strong side of the force” when it comes to holding heavy weight – which may not be too obvious when you see the overloaded suitcase I always bring while going away – even for a couple of days – the burden of being unable to choose.), I can then only be more than admirative towards those incredible human beings who also had to deal with the Scottish erratic weather… Good old days…

After this brief leap back in time, there’s nothing like a good sharp sea wind to remind you where you actually are. A few pictures of the famous Laphroaig sign and some “let’s try to spot Northern Ireland – they said you can see it from the distillery – I forgot I was short-sighted anyway so can barely see a dark shape appearing off the coast… I assumed it was Northen Ireland but maybe it was just a giant fat seagull taking the piss” moments later, we’re heading to the mash room and its impressive mashtun to indulge in a glass of the fermenting wash – once again realising how much the final product was wayyyyy better. 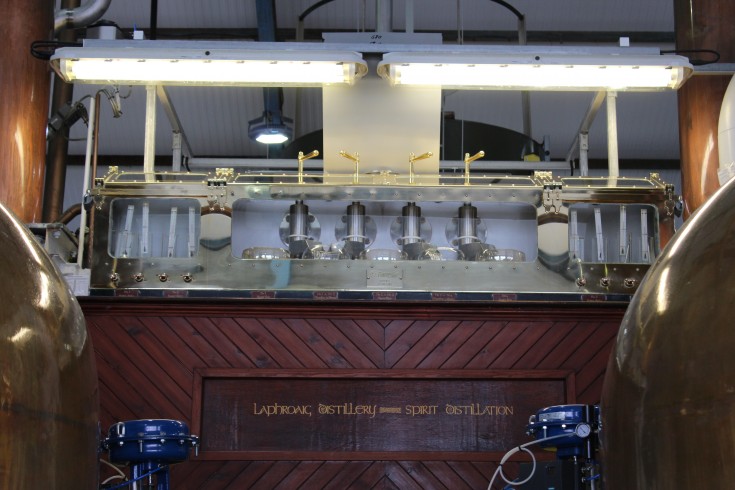 Making our way to the still house, this “wow effect” hits us again (you know this small instant where you can see the shape of the stills appearing behind a door creating a million stars in your eyes as if Metallica was just arriving on stage? Oh I know you know). I must admit I missed all the explanations from David here, starring at the 7 beautifully-aligned stills and the 2 huge spirit safes hard at work, spiting out a constant flow of new make spirit – captivating as always!

The obvious finish touch of this visit leads us to one of the warehouses where we’re given a technical lesson on the different kinds of barrels used by Laphroaig for maturation (nothing that you wouldn’t know here – just the basics of cask knowledge, still an interesting reminder though).

Back to the visitor centre lounge, we’re now the one sat in comfy couches savouring a dram (The new Laphroaig Lore for me) and taunting the following visitors with our small-sized Glencairn glasses. An extra bonus: you can bring your glass back home as a souvenir! \o/ –> And if you’re an avid consumer like me (don’t blame me, Islay isn’t famous for its huge malls, I had to find an alternative solution to quench my shopping thirst), you’ll also bring back some Laphroaig-flavoured soaps, a cute notebook, a branded tee-shirt & of course some bottles 😀 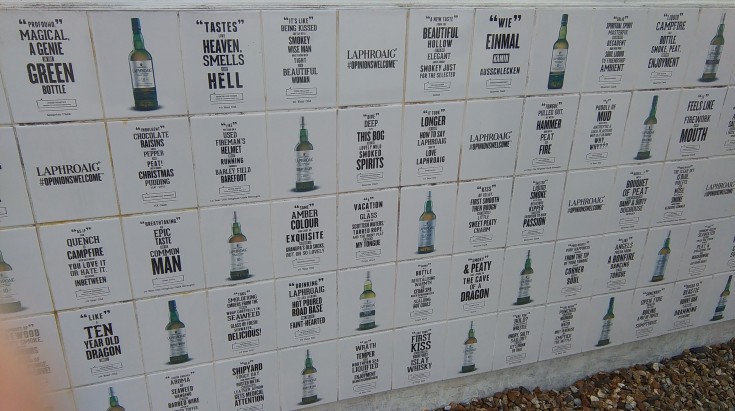 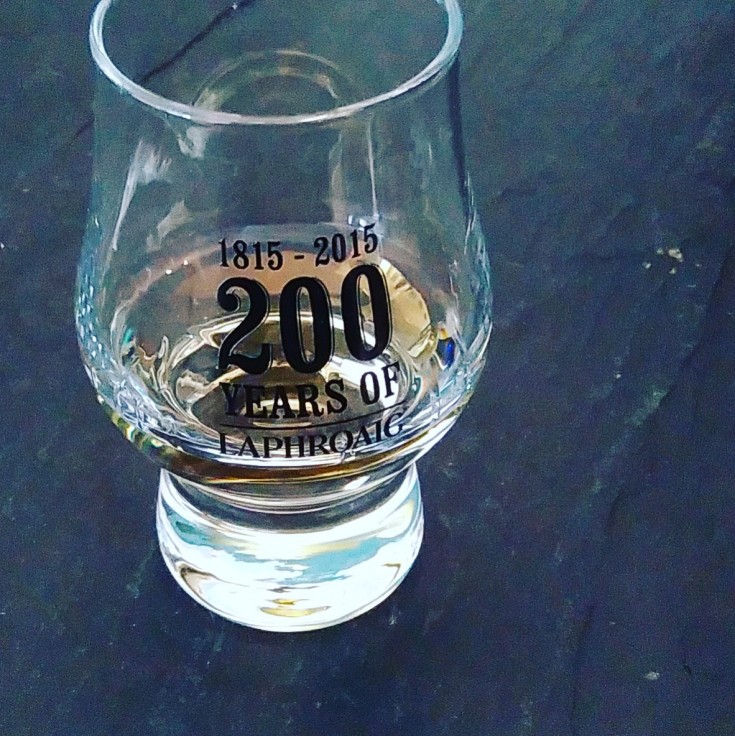 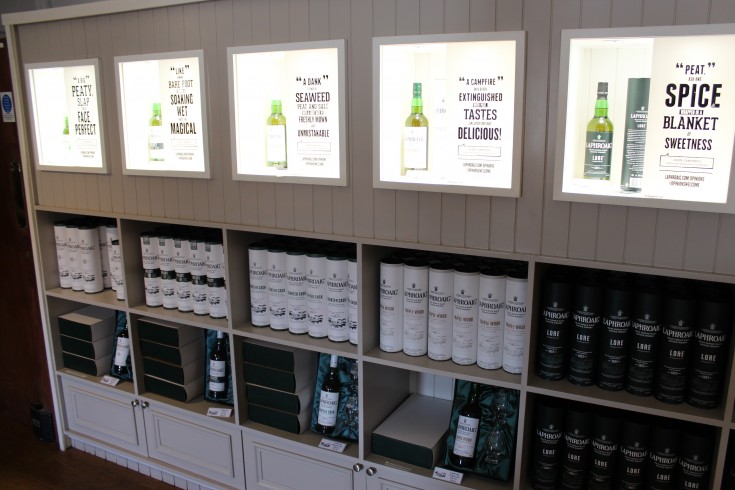 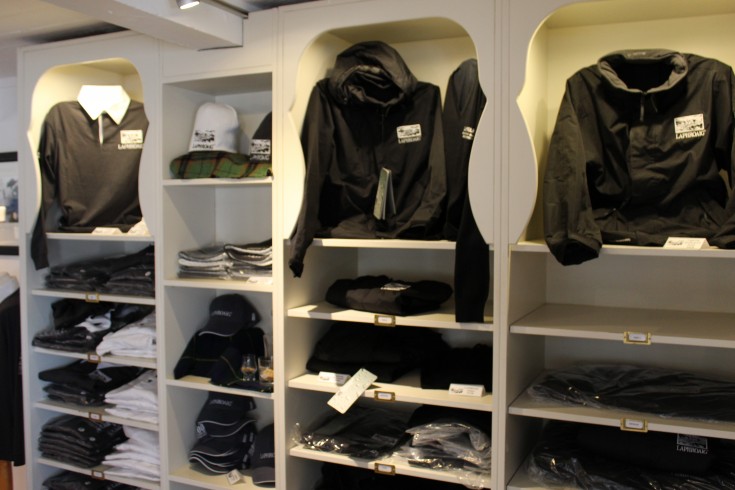